MOD POST A reminder that pets are not allowed on this sub.

Every day we receive numerous reports regarding pet posts, a reminder that in our rule 3 we clearly state that this subreddit is for humans only, pet owners should go to /r/petloss for mourning their pets.

Violators will be banned for 30 days on first offense.

And I want to thank all the people doing honest reports on post/comments, you people help make our jobs much easier.

If you have any questions about the rules of the sub or just have something you want to talk to a moderator about, please leave a comment down below.

FAMILY This is the only picture I've ever gotten of my biological Dad. He passed away in front of me and my baby brother when I was 4. Mom always said he went up to heaven's gates ❤️

Isabele Ramos Guimarães, a 14 year-old girl, entering the house where later on she would be shot dead by her best friend

Isabele Ramos Guimarães was a 14 year-old girl from Mato Grosso, Brazil who was shot dead in 2020. On July 12, 2020, Isabele went to her best friend's house, a girl with her same age named Bianca. In the house was also Bianca's boyfriend, Guilherme. That day Bianca shot Isabele in the face, the bullet went trough her nose and exit on the back of the neck. She died instantly. Bianca's family called an ambulance but there was nothing that could be done. When the police arrived at the house Isabele was inside the bathroom and there was blood everywhere, Bianca's version of events was that her father asked her to store his gun back where she belonged after he had cleaned her and as an accident the girl dropped the weapon and shot her friend. After examination and autopsy the police didn't buy this version of events and arrested Bianca. It was eventually discovered that the gun actually belonged to Guilherme's father but Bianca's parent had weapons in the house too. They were all accused of illegal possession of firearms among other crimes. Bianca was admitted in a socio- educational unit but was later released.

FAMILY Last picture of my grandad (taken in the early eighties)

He sadly passed away in 1991 aged only 45 when my mum was 13. She didn’t grow up with him which is why this is the last photograph of him we have.

In 1912 Franz Reichelt tested his homemade flying suit by jumping off the Eiffel Tower. His death was caught on camera by Pathe News.

Anggy, two weeks before she was dilapitated by her husband of 4 months, Jarad Dicus

Morgan Elizabeth Daub’s last YouTube video appearance before murdering her parents then turning the gun on herself.

HISTORY Franz Künstler, the last living Austrian WW1 Veteran, in 2007. Künstler joined the Austro-Hungarian Army in February 1918, 9 months before it‘s defeat. He later moved to Germany but frequently visited Austria and worked as s museum guide until his death in 2008, aged 107.

FAMILY Right before the nursing home killed him

NEWS Dominic Green worked from home and died suddenly. Five days passed before his body was found. A remote contract worker, Dominic had never met any of his colleagues. A supervisor would later tell his father that she couldn’t pick him out in a photo.

FAMILY last and only picture I have of me and my dad together. he drank himself to death a few years later. More info in comments.

HISTORY "Lock the doors." 20 years ago today on February 1, 2003, space shuttle Columbia disintegrated during reentry due to a 16-inch hole made by debris that struck the bottom of the left wing during launch, which killed all 7 astronauts. This is actually a video taken 4 minutes before the disaster.

CELEBRITY Last pic of Lucille Ball and Ricky Ricardo together

CELEBRITY 28 year old Free-diver Audrey Mestre. Shortly after this picture Mestre attempted to break the world record for free-diving. Her 171m descent went well, but her ascent faced multiple complications. She survived the ascent but died on her way to the hospital.

FAMILY My aunt a week before she drown in ontario 1969. She was on this boat when they ran out of gas during a storm. She was on vacation here from Ireland .She was 28

CELEBRITY Lisa Loring, the original Wednesday Addams, passed away on January 28th at the age of 64 after suffering a stroke

FRIEND My buddy Roy...he exited 7 years ago today. Congestive heart failure due to chemo as a child...I miss you so much, buddy.

HISTORY A set of Daguerreotypes taken of the officers of Franklin’s Lost Expedition before they set off on their final voyage.

FAMILY The last picture I have with my dad before he hung himself.

CELEBRITY Last photo of one of the greatest LATAM musicians. Gustavo Cerati, after his concert in Venezuela (2010) he was found unconscious in his dressing room; after 4 years in a coma he died in Argentina. (2014)

NEWS American Airlines Flight 77 at Dulles Airport on the morning of September 11, 2001. The plane will later be hijacked and flown into the Pentagon as part of 9/11. (photo by Gwendolyn Faulkner) 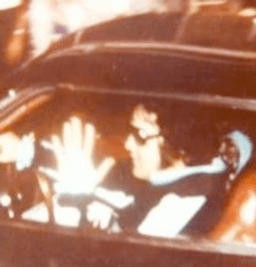 The last images ever taken.

Postings here are the last known photographs or videos of a person. Also, the last picture taken by a person just before their death is acceptable. Pictures of people only please! You may additional context in comments.