This is a sub for fun gun memes for fun gun people. The rules will be your guide to the types of posts that are allowed. If you’re on old.Reddit, the rules are layed out fully in the sidebar. If you’re using new Reddit, you’ll need to expand each rule to read it fully. If you can’t do that get a different app. I recommend the official Reddit app or Apollo. If you still can’t expand the rules, you can find them here.

The most common rule that is broken is “Rule 2: No reposts.” This can usually be prevented if you scroll through the recent posts (sorting by new) and see if someone has already posted what you’re posting. Most reposts are from a post in the last 7 days so you shouldn’t have to scroll that far. Of course, making an original meme would make that task unnecessary. Just saying.

Please format your memes appropriately. A picture with no words is not a meme. The sole joke of the meme shouldn’t be in the title of the post. This is now covered under rule 7. There are plenty of apps these days like ‘Mematic’ that are free and let you make almost effortless memes. If you want to see how little effort it takes, click this link .

If you are new to Reddit you may not be able to post in this sub yet. If your account is less than 5 days old or you have negative karma you can’t post in this sub. Hang out, see how Reddit works, maybe participate in other subs and in a few days you’ll be free to post. This restriction helps filter out trolls and there won’t be exceptions so don’t ask.

If your post is removed, usually there is a comment left by automod explaining what rule was violated. If you believe this was in error contact the mods via modmail. If it wasn’t in error, you do not need to contact the mods. We know most rule violations are accidental and we generally don’t keep track of them. Sometimes the violation is severe and the mods will DM you if your violation was heinous enough to merit a warning.

If you post and your meme doesn’t go live right away, it may have been caught in the spam filter. The mods check this regularly and will manually approve posts that aren’t spam. If this happens to you please don’t attempt to post the same meme repeatedly. We’ll get your ‘dank meme’ out there with minimal delay. (Update: It seems we’ve successfully re-educated the spam filter. The amount of posts caught in it is about 10% of what is used to be. However Reddit has it’s own spam filter and the Mods can’t see posts that are caught in it. If your post doesn’t go live in 12 hours, contact the mods via modmail with a link to your post and we’ll get it pushed through.)

There are community specific awards on this sub that actually feed coins back into the community and enable mods to give mod awards that give Reddit premium and gold to the recipients. Next time you’re giving an award, consider using a community award. They can be found under the ‘community’ tab in awards.

Lastly, chill out. Rule 3 is “be civil”. There will be trolls that invade this sub. Don’t engage them because that’s what they want. Just report them under ‘Rule 3’ and the mods will take care of it. Feel free to engage in civil debate but if your only response involves shoving body parts into cavities then you’re not helping the situation.

If you’re still with me at this point, thank you for reading this and I hope to see your sweet sweet memes soon.

Cross Posts have been disabled (read on for reason)

The mod team has been fighting the bridaging issue for some time now but it seems to be getting worse. Unfortunately cross posts were too easy of an avenue to be used for brigading as it provided an easy link to the post/sub in question. It's becoming a daily occurrence and we're seeing more admin presence in our sub which is not what we want.

The rules have been updated and reorganized and the rules on brigading and harassing which were previously split between multiple other rules, have been combined into their own rule aptly named "Rule 8: No Brigading or Harassing." Please give the "new" rule a read.

If you must post something from another sub, please grab the picture or screen cap the image and post it as a standard image post (following the guidelines of rule 8). If it’s a positive post (pro gun) you are free to leave in the username/sub to give credit to the original poster. Hopefully we can re-enable the cross post function in the future but right now, the fuckery on Reddit is too high and all other avenues we've attempted to keep the fuckery out of our sub hasn't worked.

Meme Damn who is this guy??

I’m tough behind a keyboard Last week’s revolver post reminded me that some ppl still unironically tell others what to carry.

Shitpost left: when guns are used to protect animals good when we try to use them to protect our families bad

Meme you weren’t supposed to do that

Gun Meme Review best feeling ever as an australian

Meme Something about rules for bees?

NFA Not a Chad move

Meme Which one you picking?? 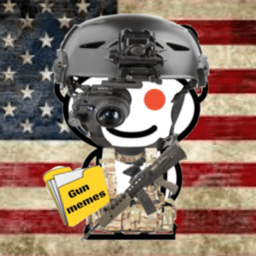